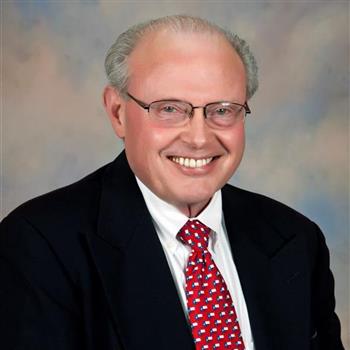 Over 20 years of service on the CISD Board makes Dr. Kent Rogers a veteran in more ways than one.  A former Navy sailor aboard the USS Grand Canyon, Dr. Rogers currently serves as the Medical Director of Corsicana’s Navarro County Health Department.

Dr. Rogers helped form CARE in the late 80s which drew him to the interworking of the district and an appreciation for the impact boards can have on education and the community.   So, he decided to run.

In Corsicana ISD, “…we are emulating the best of America’s notion of a melting pot and blending the best qualities of diverse individuals into a competitive, curious, compassionate world of young adults.  This should be and is indeed a mission.”

Dr. Rogers and his wife Donna Jo have 3 children (Cyndi, Susan and Mark).

A Corsicana native, Ms. Leah Dill Blackard currently serves as President of the CISD Board of Trustees.

After spending 7 years away from home, upon returning to Tiger Nation in 2001, Ms. Blackard became deeply involved in the community and district serving with the United Way, on the First United Methodist Church Board of Trustees, as PTO president, Chair of the Standardized Dress Committee, and as President of the Corsicana Education Foundation (not once, but twice).

After several years of service, the UNT alum felt that she had the knowledge and leadership ability necessary to add to her love and passion for CISD… she knew the “obvious” next step was running for the school board.  “I’ve been told I am fiercely passionate about CISD, and I take that as a compliment.”

Blackard and her husband Stephen have watched their children Reese (16) and Dill (10) attend some of the same schools she attended growing up: Bowie, Carroll, Collins, Drane, and CHS.

Currently in her ninth year of Board service, (2008-2014, 2016-present), Blackard’s connection to and heart for CISD is undeniable “being a Tiger is part of who I am…[and] while it may sound cliché, I truly want to give back to the district that was so influential in my life.  I take CHS’ motto to heart, TCC!”

Although new to the CISD Board, Ms. Cathy Branch is not new to service.  A native of Tomball, during her short twelve years in Corsicana, Mrs. Branch has served on the YMCA and Corsicana Education Foundation Boards, and has volunteered with Northside Baptist Church and as a community Bible study teacher.

So don’t call her a transplant, “I call this town home.  Home for my family.  So I have a lot of passion for CISD.”

Ms. Branch says that, “Corsicana ISD is a huge part of the community.  I want Corsicana to thrive,” and decided to run for the school board “to be involved with the school to the fullest for each student and each teacher.”

Having served for twelve years on the CISD Board, Ms. Barbara Kelley says, “I love the fact, that we have committed administrators, teachers and staff who want to see our students succeed.”

Ms. Kelley’s roots run deep in Tiger Nation.  A 1984 CHS graduate, she has served the Corsicana Education Foundation and the Navarro County NAACP.  Currently the Police Lead Telecommunicator for DART, Ms. Kelley having lived in, gone to school and worked in Corsicana, “wanted to take the next step as a community leader, to become more involved within our school district” by running for the school board.

Rev. Ed Monk grew up in Dallas and graduated from Baylor with a BA in Religion and a Master of Divinity degree from Nashotah House.

Rev. Monk began his service to Corsicana in 1999 and has served in various positons on nearly 20 Boards and organizations, having served on the CISD Board for nine years and as President for two (2015-2017).

Currently, in his work as the Rector of Saint John’s Episcopal Church, Corsicana, Rev. Monk interfaces with, according to him, “…some of the most at-risk individuals in our community. What I see every day are individuals who lack the basic skills needed to survive in the world.” Pointing to his current work and watching his mother educate students for years, Father Monk developed a belief that “a strong school system can make all the difference in a student’s life.”

So, armed with a passion for education and for Corsicana, Rev. Monk decided to run for the School Board. “I am passionate about Corsicana ISD because there is no Corsicana without it. Not only in CISD the largest employer in Navarro County, it is also the largest supplier of job-ready employees in Navarro County. Simply put, CISD is the fuel for the economic engine of our community. It is our responsibility to make sure that CISD is the best it can be, because it provides the refined resources to make our world go. The job of CISD is to transform students into adults who can not only transform the world, but know how to keep it running smoothly.”

With a record of service to various organizations that began nearly 15 years ago, Dr. Seth Brown maintains a connection to the community he cares for as a pharmacist outside the walls of his formal workplace.  Yet, long before his service to the community began, Dr. Brown developed a passion for education.  “Being a child of a school teacher/administrator, I know the impact that good school systems have on their communities,” said Dr. Brown.

A busy doctor and family man, when asked why he decided to run for the Board, Dr. Brown answered, “As an employer in this town [with] 3 children who will grow up in these schools, …I want to see that our students of the future have the best education and opportunities available to them to meet the demands of a changing world.”

Although originally from Frankston, Texas, Dr. Brown calls Corsicana home.  “When I moved to Corsicana in 2004, this town welcomed me with open arms.  I have grown to love Corsicana…I have seen many examples of how CISD is helping our future grow, and I am proud to be a part of this organization.”

The University of Houston graduate is married to Kelly Batchelor Brown and has three children:  Cade (11), Ryan (7) and Brooke (4).

Ms. Jamie Roman became a School Board trustee just three short months ago, but is a veteran volunteer in the community.  A Nacogdoches native, Ms. Roman landed in Corsicana 14 years ago and hit the ground serving…on PTO Boards at Bowie and Sam Houston Elementary schools, Collins Intermediate and Corsicana Middle School, as a mentor for the DEFY non-profit organization, and as Vice President of the Corsicana Athletic Booster Club and President of the Corsicana Cheer Booster Club.

Ms. Roman’s many years of volunteer work in the schools represents her belief and commitment to “public education as the best choice to educate and develop our students to be future leaders, citizens and members of the work force.”  She goes on to explain that, “The children we educate today, will be the teachers, nurses, doctors and law makers of tomorrow.”

This passion for education spurred Jamie Roman’s run for the school board, according to her “to ensure that students, teachers and staff of CISD get the tools they need to be successful so that our community, state and country can continue to prosper… and to help our district achieve its goals.”